This year�s US Vintage Grand Prix and 26th Running of SVRA�s Collier Cup All-MG Race (September 9-12) found 33 MG vintage racers and families enjoying the kind of weather this event is famous for �warm sunny weather bracketed by cool, damp Fall weather where Winter gear had its advantages. Usually run on Sunday, this year�s Collier Cup race was scheduled for last race Saturday. This turned out to be fortuitous as a sunny, mild Saturday was bracketed by damp, chilly Friday and equally dismal Sunday morning.

For those not familiar with this event, SVRA, Watkins Glen International Raceway and the town of Watkins Glen conspire once a year to rediscover the roots of post War American road racing by staging four days of road race activities at the Glen along with a celebration geared to recollect the early days of the Watkins Glen Grand Prix when the race was run on public roads in and around the town of Watkins Glen. Road race history is brought to life through reenactments such as vintage race car inspections at Smalley�s Garage in town, the place where the likes of Miles Collier, Briggs Cunningham and Bob Bucher brought their cars �in the day� to have them cleared for competition. Upwards of 30,000 screaming fans line the streets of a closed off downtown Friday afternoon as 100+ vintage race cars line Franklin Street in preparation for laps of the old road course before heading back to the track. Then there is the International Motor Racing Research Center, Seneca Lodge, Watkins Glen Walk of Fame�the list goes on.

The US Vintage Grand Prix is all about exciting wheel-to-wheel racing and this year was no exception. 25 MGs took the green flag for the Collier Cup. This year�s overall winner was Charles Guest in his screaming fast Midget, followed by John Targett in his MGB, and Harry Gentry in his Midget. Other winners included Mike Barstow (Jack Archibald T Cup for first production T Series), Todd Treffert (Bucher/Decker Trophy for first MGA) and Charles Guest, who won the Denver Cornett, Jr. Trophy for first MG, and William Glanville Cup for first Midget. This year�s Collier Cup winner was Les Gonda, as selected by vote of participating MG vintage racers.

A Safety Fast job well done to all MGs who participated in this year�s 26 SVRA Collier Cup race! 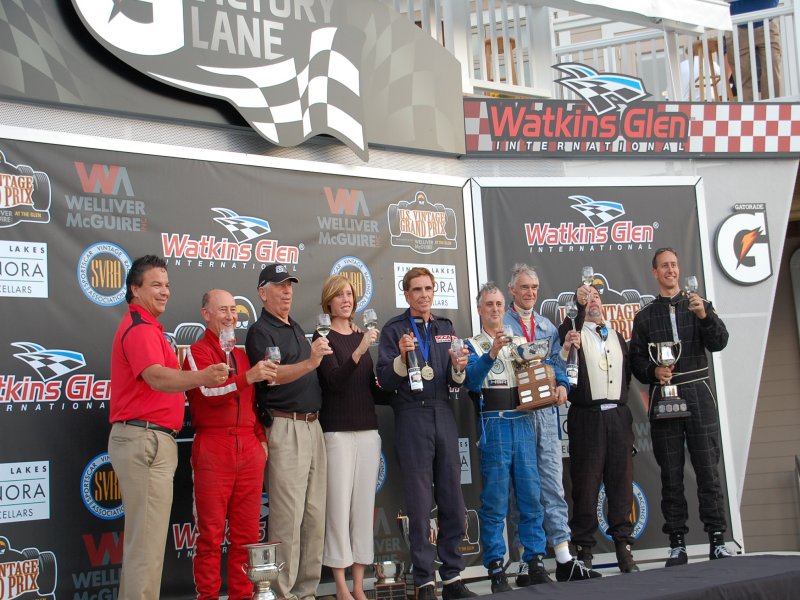 (The above article is available for publication)