On Saturday March 4, 2006 more than 50 MG enthusiasts attended the �Conversation� to initiate the display of Denver Cornett's 1948 MG TC #7 Race car. The car, artifacts, and photo displays will be on display until June. 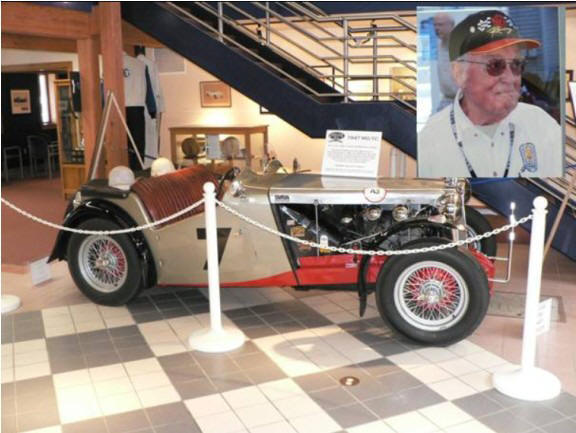 The enthusiasts were welcomed by Council member J.C. Argetsinger and advised that this "Conversation" was the largest of it's type to date. Considering the luminaries of world class racing that have been the topic of prior events, this was a great compliment to Denver and Family and the MG racing community.  J.C. stated that his father Cam Argetsinger bought a red MG TC in January 1948, and at the 1948 Indianapolis 500, announced that a road race was going to be held that fall in Watkins Glen.

During that summer, a significant number of American and Canadian MG TCs were observed driving the proposed route "with enthusiasm".  Apparently it did not take much encouragement to get the new MG owners excited about a road race.

The next presenter was MGVR member Dick Powers.  Dick had arranged for and also introduced the MG TC panel of Jim Carson, Frank Mount, and Jack Archibald. Jim related that his first Glen race was memorable, but his main memory was the 9 hours tow of his TC to Philadelphia by Otto Linton.  The tow was by rope, but after many failures, they stopped and found a piece of cable to complete the trip. Those early racers were frugal AND tough.  Jim also talked about coming down the long hill into Milliken's Corner. That section of track was "breathtaking" while braking at the bottom.

Frank Mount entered his MG TC in the 1959 and 1960 All MG races.  He recalled that the eight Canadian TCs & TDs were considered "modified" by the race promoters and  were given their own class which was lots of fun. At that time in Canada the race fuel was supplied at the track, and he had not planned on money for fuel. Once the locals found that out, they took up a collection and gave him $10.00 for fuel. Joe Tierno remembered that the Canadians at that race did have lots of "beverages", so their planning was actually not faulty.  Joe also remembers how quick the Canadian cars were on the track.

Jack Archibald said that he always considered Jim Carson to be "more mature" until he found out that Jim is younger than he by a few months. Jack first came to the Glen as a spectator in 1950.  He immediately decided that he needed to become a racer.  He found a MG TC in Lewiston NY in the same year, and owned that TC for 54 years, recently selling it to a collector in Amherst NY, which is about 10 miles from Lewiston. While a 1950 graduate student, he went to England and specifically to Abingdon. While standing in the MG Parts department to get some factory parts for his TC he met Harry Lester.  In 1951 Jack took his TC to Bridgehampton, and Like Denver, rolled the car in his first race. The friendly Canadian racers loaned him two spare tires, so he could run again. Unfortunately the TC was a bit too damaged, and Jack needed two years to put it right.  Later Jack married and had a family and racing the TC was not possible.  However, once vintage racing became popular, Jack got the TC race ready and entered the 1998 WGI 50th anniversary race. This was actually his first track time at WGI, where he had started his career as a spectator some 48 years earlier.  Jack won the Collier Cup in that race, and said that was the absolute highlight of his MG TC racing career.  In response to Jack's stories, one of the audience remember how hard the TC would shake under braking on the downhill.  Jim Carson agreed with that observation.

Bill Green gave the tribute to Denver Cornett.  Bill stated that Denver was 22 years old in the 1948 race, and rolled his TC into the riverbed at the Stone bridge on the second practice lap.  While inside the inverted car, Denver heard the spectators wondering out loud if the driver was dead.  Denver said "Why don't you get the car off of me and find out"?  Apparently, they thought that was a fair plan, and quickly put the TC back on it's wheels.  One of the photos in Bill's display shows Denver standing on the right side of the car.  If you look closely, you can detect a white blur, which is discernable as a helmet at a high rate of speed about to impact with the inside of the left door.  Apparently Denver was done with the helmet for the moment.  Denver was loaned two wheels from Briggs Cunningham and ran the remaining races without further incident.

In 1950 Denver entered the DUPONT SPECIAL, which was a flattie V-8 in a Indy Car chassis.  The car was quick, but suffered a disabling shunt in that race.  Denver returned to his roots, and ran the MG TC annually thru 1955 and retired from racing in 1963.

Denver did not forget his roots, and when vintage racing became popular, he restored his # 7 TC and returned to race at the Glen in 1994.  Apparently that race kindled great memories, as Denver continued to campaign his TC at other SVRA events, such as Road America.

In 1997 Denver decided that the Collier Cup overall race winner should be given recognition, and donated the Cornett Cup Trophy for that purpose. This cup has been awarded annually. It usually goes to a MGB or MGB GT V8 entrant.

Mrs. Denver Cornett was the next presenter and gave her deepest "thank you" on behalf of herself  and Denver.  Sherry was clearly very moved to see and hear the appreciation and high regards given to Denver's racing career at the Glen.

Denver Cornett III recalled that his dad loved powerful engines, and his earliest memories were of roaring engines in the family garage. Denver also loved great cars, and even delayed his wedding to Sherry until they could take a Mercedes Gull wing on their honeymoon.  Denny said that Denver bought his 1948 TC in Florida and raced it for many years. When the TC was retired in 1963, it was put on jack stands for about 20 years and nobody was allowed to touch it.

When Denver was invited to the 1998 race the car was renovated and returned proudly to the streets of Watkins Glen.  During the reenactment, Denver told Denny that when he was on the Glen circuit, he was again that 22 year old man.  Denny also recalled that Denver was very close to Otto Linton, and always stopped by Otto's dealership on the way home from the Glen.

At this time the "conversation" was opened up to the audience. Artist Robert Gillespie recalled the year that Denver offered to give him one circuit of the old course in the reenactment.  Denver said "They don't want me to stop, so you need to be ready to jump in quickly". Once in the car, Denver drove with "gusto".  According to Robert, that lap and all the thousands of people waving at #7 and it's driver is a memory that he will never forget.  Denver was waving back, but still took the Stone Bridge turn with great enthusiasm.

Joe Tierno remembers when he was putting the 1998 event together. He  obtained Denver's phone number.  When he called, Denver's quick answer of the phone caught Joe off guard, and he could only think to say "I thought you were dead". Apparently that was not a problem for Denver, as he immediately agreed to come to the 1998 event.  Ironically this was fifty years after the 1948 race, when the fans at the Stone Bridge also thought Denver was dead.

I have many recollections of Denver Cornett.  I first met him at the 1998 Banquet, and immediately liked his manner. At the vintage races then and later, he would always stop by the MG paddock in the evening.  His not too subtle message that he would "really" like to drive an MGA were impossible not to enjoy.  However, once the offer was extended, he would wistfully say "maybe next race".  He was a wealth of information about the English car dealership process, and his trips to England to find cars for his dealership.  He was also a great promoter of Fine Kentucky Bourbon, and how to "properly" enjoy the beverage.   He often asked fellow MG racers to visit his home in Bagdad KY.  He was very pleased when I and my wife Chari stopped by on the way to VIR for the MG Focus event.  He and Sherry were great hosts but all too soon it was time to leave for the track.  He and Sherry asked several times if we could stay just a bit longer.  What great hosts they were on that visit.  Getting to know the Cornett family has been a very big part of my vintage racing experience.

Notable Attendees at the event were Richard Knudson, George & Nancy Hershel of NEMGTR, Robert Linton & daughters, son of Otto Linton.  Bob Williams and Dave Garrison of SVRA. Sam Argetsinger, who will be storing the TC after it's display.  Cameron & Jean Argetsinger, President of the International Motor Sports Research Center, and Dave Wild, Downtown Festival Committee and involved in the 1959 and 1960  All MG races hosted by the Western NY chapter of the MG Car Club.  All that attended stated that this was a very special event for the MG community, and it was a pleasure to be in attendance.  ds